Thank you for your patience while we retrieve your images.

Created 5-Mar-18
3 photos
Outside of our home, in our peaceful cull-de-sac, Tina's Hammy was happy to see our neighbor's dog.
First sign of trouble was discrepancy in number of dogs and number of leashes present. Dogs without a leash are usually either in their own backyard or extremely well trained. Well, neighbor's dog didn't belong to either of these two groups, and used this freedom to go full speed toward Hammy.
Like in movies, time slowed down. Really!
I started to tighten Hammy's leash, but the encounter was inevitable, and went from possible threat to a full red alert in a matter of milliseconds. Other dog crashed Hammy to the ground, pressed him with front paws, and went for his throat. It was like watching National Geographic movie with a lion and a gazelle, except it was happening right in front of my house, and in the role of wounded gazelle was my daughter's poodle.
I have no idea how long it took me to get there. In real time - probably a second. In the slow-mo molasses I experienced, just short of a year. Of my life.
Luckily, speed of sound was not impeded by the slow motion, so my yell, using the air gathered when I saw that the dog doesn't have a leash, was realistically matching the sounds of already mentioned Nat-Geo scene, but the lion's part of the dialog. Dog got the message momentarily and didn't wait for me. It ran away so fast ,that it will probably have nightmares for the rest of the month.
As it should! Let it remember that bullying is not OK.

Time was slowly catching up with the rest of the world. Hammy was squealing pitifully on the ground, looking at me as if asking: "WTF? I just wanted to play."
In situation like this, luxury of panic is something better left for some other time. First order of business was to check Hammy. He was still laying down. Was he hurt? I had to fight the impulse to pick him up, because proper triaging means letting him get up if he can. He slowly raised himself with a bit of help, and at the first glance, other than violently shaking, his limbs looked good. I touched all joints, slightly pressed and he didn't flinch. So far so good!
There was no blood to see, but he is like a Karakul sheep, all black and curly, so it is hard to see the skin. I checked around the neck, shoulders, legs, and didn't find any wounds. Maybe teeth didn't brake the skin. Girl that didn't take care of her dog, came back telling me that she didn't find anything in the jaw of her dog, so maybe it was stopped on time. I almost agreed when I noticed the blood on my fingers. It was not much, so not life threatening, but I didn't have to check anything anymore. Time to go to the vet. Now!
Tina was on her way from work, so this wasn't a time to call her - she'll learn about it when she comes.
To cut an already long story short, Hammy was bit into his ear. Probably because his collar and ear covered his throat and the other dog didn't have much experience in this business, this was the only laceration found. Three staples and a big purple bandage later, Hammy was ready to go home with some antibiotics and pain medicines to help him through next couple of days.
In the aftermath, Tina and I agreed that it is best if I go and talk to our neighbors about what happened. She was too angry for any kind of peace or war talks.
They were very sorry, as this never happened before. They promised that the dog will never again leave the place without a leash. Of course they'll pay the vet. And they apologized again. And again.
It is very hard to think clearly in situations like this. It could be your pet or your kid that got hurt or that hurt others. You never know when are you going to be on one side of situation or the other. How do you prevent it? How do you not repeat the same mistake?
~~~
Наш јуначина, пас наш чуваркућа, храбро је скочио другом, много већем, псу на пут и није му дао да дође на наш посед. После кратке али љуте битке, када се слегла прашина, комшијски пас је одјурио са репом међ' ногама, а наш херој је остао лежећи на бојном пољу чекајући да му извидам ране јуначке. Руке су ми биле ми крваве док сам рањеника носио код доктора да га прегледа и превије. Специјалиста за све врсте рана и ратних проблема, је направила само једну грешку - превила га са љубичастим завојем. Па где то има? Како се дивити јунаку уфачлованом у лила? Погледаш га па се насмејеш, а он те тужно гледа, као да каже: 'Смеј се само, смеј. А када те је требало бранити, ниси се смејао. Онда сам ти био добар, јел' тако?' 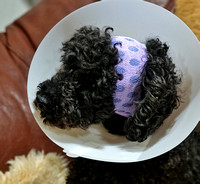 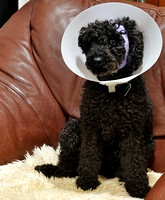